The Jermann estate was founded in the Collio Goriziano (the eastern hillsides) of Friuli in Italy in 1881 when Anton Jermann emigrated from Austria. Until the 1970’s the Jermann family farmed livestock and grains in addition to tending grapevines for bulk sale. The modern winery was launched in earnest in 1975 with the release of the influential Vintage Tunina by Silvio Jermann

Silvio was the fifth generation in Friuli and he brought clean winemaking practices to the estate, along with no shortage of creativity or panache. His wines were a sensation and Jermann became an Italian winemaking icon. Jermann is known for their precise bottlings that capture the essence of Friuli (and its famed ‘Ponca’ soil) through creamy, powerful, and acid-rich wines.

In 1973, Silvio Jermann started working with an old vineyard near Farra d’Isonzo in the Italian region of Friuli, not far from the Slovenian border. It was a field blend; at the time, the grapes were unknown.
It was the kind of vineyard that could be found all over Italy before the World War II, when subsistence farming and sharecropping was the norm. But, by the 1970s, interplanted plots were relics in modern Italy. Silvio farmed the old vineyard as it was, christening those 16 hectares ‘Tunina’ in honor of the woman who first planted them.
Inspired by the pristine wines of Mario Schiopetto, Silvio took an ancient way of grape growing and subjected it to modern way of winemaking. Notably, he induced a gentle extraction of ‘free run’ juice, followed by a long and cool fermentation in stainless steel, and then aging it for more than a year on the lees before bottling.
The result was equal parts power and precision. He adorned it with the Star of David formed from grape bunches and leaves (a nod to Jewish ancestry) and called it Vintage Tunina. His first commercial vintage was 1975, released in 1977. He was 21 years old.
It was a watershed, both for the quality of wine and the style and attitude Silvio brought to agrarian Italy. In 1979, Luigi Veronelli, at the time, the most influential food and wine writer since Pliny, announced the bottling as “unrivaled,” heralding not only a new young star of Italian wine, but bringing the entire region attention and acclaim and ushering in an era of ageworthy Super Whites from Friuli.
If Vintage Tunina was the beginning. Where Dreams Have No End, first released with the 1987 vintage, was Silvio’s boisterous encore. Dedicated to the first song on U2’s Joshua Tree album (‘Where the Streets Have No Name’), it remains, to this day, his only barrel-fermented wine.
97% of the wine is from the Chardonnay grape, with the other 3% is a family secret. The wine sees no malolactic fermentation, stretching taut the tension between oaked Chardonnay and the natural acidity that comes from Friuli’s famed Ponca soils. It’s a fascinating take on the grape, and it quickly achieved cult status equal to (and in some places, greater than) Vintage Tunina.
The wine represents Silvio’s most expressive tendencies, both in wine style and labeling. There is the multi-colored iris staring out from the bottle, along with the phases of the moon (the wine is harvested and bottled according to the most “propitious lunar phases). Beginning with the 1996 vintage, Silvio changed the name of the wine to Were Dreams, Now It Is Just Wine! and started using the bottling to celebrate celestial events and dabble in numerology. The Hale-Bopp Comet was visible on the capsule until 2003, when it changed to a drawing of Mars (Silvio’s astrological ‘lead planet’), before changing yet again to two comets that were visible in 2013 that burned up in the sun.
Eventually, the label and name changed to its current iteration, which is officially named W....Dreams.... .. ... (the thirteen dots are intentional). Colloquially, it’s known simply as Dreams, but the extended ellipses are important to Silvio. According to him, it’s where you take his ‘Dream’ and give it your own interpretation; to cement, in a way, through wine, the cosmic connection point between you....and him... .. ...
In 2016, the influential Italian wine guide Gambero Rosso called Silvio to Rome. It was there that the press elected Jermann as: “The most representative producer of Italian white wines in the world”. Nearly 40 years after the release of his first wine, Silvio had realized yet another dream.

“If Vintage Tunina was the beginning. ‘Where Dreams Have No End,’ first released with the 1987 vintage, was Silvio’s boisterous encore.”

Region: Friuli
Founded: 1881
Proprietor: Silvio Jermann and Antinori Family
Winemaker: Luca Belluzzo
Vineyards: Total 180, divided in 100 ha in hills and 80 ha in plains.
Environmental: Sustainable
Friuli lies northeast of Venice on the border of Slovenia, and the home of the key historical city of Trieste. It’s illustrative to point out that the area changed hands several times over the centuries, once a key port of the Austro- Hungarian Empire before finally being brought in as an official department of Italy following the First World War. And, while Italian is the primary language, many residents of Friuli speak also Friulian (a separate and historical language), Slovene, and German.
Understanding this history and culture is key to understanding the wines; it’s one of the few areas of the country that labels their wines varietally (rather than regionally), and the wine styles vary dramatically, from orange wines to sparkling to pristine whites, bottling - so to speak - the varying forces that have influenced this region over the centuries. However, if there is one binding element to all these wines, it may be the region’s famous soil, ‘Ponca.’ This marl and sandstone mix is unique to the region, and it has a high Ph and water draining and properties that bring out an electric current of vertical acid that offsets the richness and creaminess brought out by the long, warm days of the region in Summer.
Jermann farms two distinct estates in Friuli; one in the region known as Collio and another in Isonzo. Both areas are best known for their white wines of incredible power and elegance. 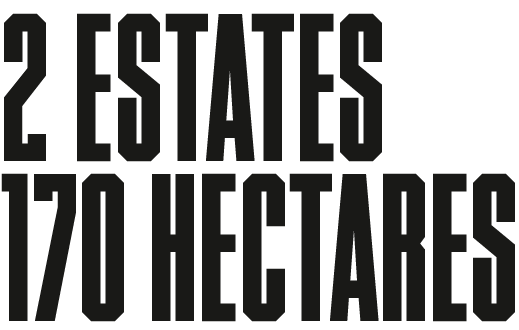 There is a sign above the entrance to Jermann’s winery that lists the rules of the winery, in order: ‘Cleanliness, Order, Cleanliness’. This can tell you everything you need to know; Jermann’s wines are pristine. In this way, they can be perfect encapsulations of both site and vintage, consistently made to be varietally correct and perfectly balanced.
The vast majority of winemaking here is done in stainless steel to retain pure fruit aromas, but some barrels are used conservatively to add depth to their bottlings of Vintage Tunina, Vinnae, and Red Angel. And, while Dreams is barrel-fermented and aged in oak, it’s remarkable how that richness changes from nose to palate: Jermann isn’t trying to emulate Burgundy, so much as make an acid-forward Friuli wine with a Burgundian approach.
To be plain, this isn’t rustic winemaking; these are wines that are professional, polished, and could only come from Friuli.

Maze Row imports five wines from Jermann, including four of the estate’s emblematic whites - notably the watershed Vintage Tunina and the culty Dreams.