Brancaia was founded in 1981 in Castellina in Chianti by Swiss expats Bruno and Brigitte Widmer. In 1998, they passed the winery on to their daughter, Barbara Widmer, who has also been the winemaker since 1998. She has has brought the estate consistent acclaim through powerful blends and principled winemaking

Brancaia is spread across three estates in Tuscany; two are located in Chianti Classico (in the subzones of Castellina and Radda) and another in the Maremma, along the Tuscan coast. Brancaia’s flagship wine, Il Blu, is a blend of fruit from the two Chianti estates, while their opulent Ilatraia bottling comes from Brancaia’s vineyards in the Maremma.

2018 marked Barbara Widmer’s 20th vintage as the co-owner and winemaker of Brancaia, having taken over operations from her parents in 1998 after staging at Domaine des Balisiers, Switzerland’s largest biodynamic winery. It was there that she developed a deep conviction for winegrowing in concert with nature. To Barbara, wine quality is always the top priority. But she’s quick to point out that this is not mutually exclusive from principled vineyard management; on the contrary, they are directly connected.
In 1996, while Barbara was still in school, she instituted cover crop practices at Brancaia (she even wrote her university thesis on the topic). In 2000, she and her team installed a solar water heating system. In 2012, Brancaia moved entirely to spontaneous fermentations, and in 2013 they installed a graywater recycling system. 2014 found the winery officially monitoring their carbon footprint through a third-party, while they continue to be carbon negative. They banned pesticides and herbicides in 2015, and their conversion to full organic viticulture started in earnest in 2016, with official recognition from the EU in 2019.
If you have tasted Brancaia’s wines, perhaps this all seems counterintuitive; it’s not uncommon now for some to associate environmentally responsible winemaking with the rustic, nervy, cidery wines that have become synonymous with ‘natural winemaking’. But what Barbara makes is different: the wines are concentrated, polished, ageworthy, and yet still benefit from the energy that comes from a more natural approach. This lift, this tension, is the key to Brancaia’s wines, the difference that inspires writers like Monica Larner to proclaim that Il Blue, “has one of the most impressive track records of a modern Tuscan blend that I can think of”.
Barbara sees organic viticulture as a moral imperative, but this is as much in service of better wines as a better planet. And it’s not just an improvement in grape quality; she believes that the fruit is more authentic, more of their place, and more connected to the land. In that way - and somewhat paradoxically - they have become more of an extension of the winemaker, too.

Region: Tuscany
Founded: 1981
Proprietor: Barbara Widmer
Winemaker: Barbara Widmer
Vineyards: Castellina 15 ha, Radda 12.5 ha, Maremma 40 ha
Environmental: Certified Organic in the EUU
Brancaia benefits from having three distinct estates in the region of Tuscany, in many ways representing polar extremes of what Tuscan landscape can be.
In Chianti, they work with vineyards in both Radda and Castellina. Both of these sub zones are closer to the Apennine mountain range that runs through the center of Italy like a backbone. They are high elevation vineyards in areas with breathtaking landscape changes, surrounded by thick green forest. The soil here is rocky, remnants of ancient oceans rising and receding, causing erosion and to mix clay, rocks, and limestone over time. In particular, Brancaia’s vineyards in Radda, benefit from a soil known locally as ‘galestro’ - a sandstone and marl mix that gives the vines proper drainage while maintaining water reserves well into Summer. This is Sangiovese country, but Brancaia stands apart with some of the most compelling Merlot in the world being grown in her Radda vineyard.
The Maremma, on the other hand, has a far more Mediterranean climate and feel. The gently undulating hills here are sunbaked and covered in scrubland. Lower elevations bring warmer temperatures moderated by the nearby Tyrrhenian Sea, and it’s here that Brancaia farms for their richest expressions of wine. However, it’s important to note that the estate doesn’t irrigate these vineyards, as winemaker Barbara Widmer feels that would reduce the character and depth of flavor in the grapes. Instead, she plants vines that she knows can tolerate the climactic conditions, specifically Petit Verdot, Cabernet Sauvignon, and Cabernet Franc.   Together, these two areas give Brancaia an incredible wealth of grapes and styles to choose from, ensuring a consistency of quality in her blends from vintage to vintage.

““One of the most impressive track records of a modern Tuscan blend that I can think of.” 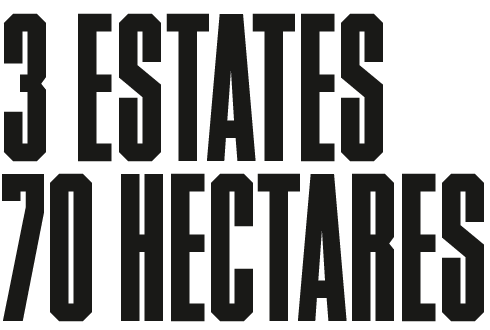 Brancaia’s philosophy on winemaking starts with stewardship. The organic program is more than window-dressing; CEO Barbara Widmer has invested her life into making the best possible wines from a property that can be sustained for generations. Organic farming, cover crops, graywater recycling, native yeast fermentations, the list goes on. Ultimately, she seeks a wine that speaks specifically of its place and she feels that can only be achieved through the most natural methods.
As for the wines themselves, they can be characterized as being in the Bordeaux-model. Barbara adjusts her blends from vintage to vintage based on harvest factors in each estate. This way, she can bring out the best possible expression in her top wines, while declassifying additional grapes into her three-estate blend, Tre. In the end, this gives the wines at the top of Brancaia’s portfolio remarkable consistency and character, while the more accessible bottlings represent a staggering value.

Maze Row imports four wines from Brancaia, including their flagship Il Blu from her vineyards in Chianti, and her top expression from Maremma, ‘Ilatraia.’